A 26 year old walking on Sharp Edge with a group of 10 friends, slipped at the usual place probably due to the icy conditions. He fell around 50 foot down a rocky gully reporting a possible arm injury. His brother managed to scramble down to him but they were then unable to move any further. Helimed 58 were on the scene quickly and they dropped 2 medics off near the site and they were able to reach the casualty and assess him. The team then sent two vehicles of members to Mousethwaite where Helimed 58 was able to RV with them and uplift 6 of the team to the foot of the ridge. This saved a lot of time and the team were able to rig from above the casualty and sent the team paramedic down and they were then both lowered to the ‘chicken path’. The casualty was flown down to Mousethwaite where he met up with his father who took him to hospital to get checked. 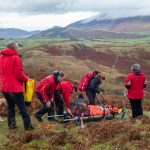