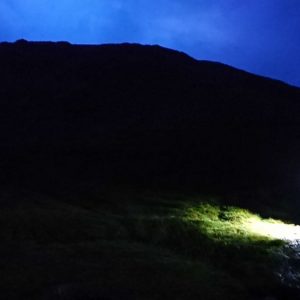 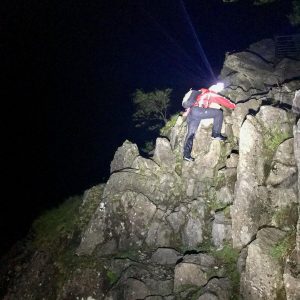 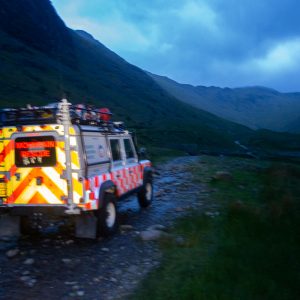 At midnight on Sunday Keswick team were called to assist the Cockermouth team in the search for a missing man who was reported as being exhausted after a failed ascent of Scafell Pike from Seathwaite in Borrowdale. The man had mistakenly descended to Wasdale and then climbed back up into the hills in order to return to Seathwaite. He lost his way on the Sty Head path and said he thinks he passed the night on the slopes of Great Gable from where he called for help. Unfortunately the signal was not strong enough to fix an accurate location before the battery died but placed him somewhere at the top of the Ennerdale Valley hence Cockermouth’s involvement. A small team from Keswick set off at half past midnight to cover the obvious descent paths back to Borrowdale from the Great Gable/Sty Head area. The weather was cool and dry but very windy. On our approach to Sty Head Tarn it seemed like it had started to rain but in fact it turned out to be spray being picked up off the tarn! The search along part of the Corridor Route and up Aaron Slack to Windy Gap proved fruitless although the man later said he had seen torches near Sty Head Pass but was unable to respond as he didn’t have a torch or whistle. The team got home around 5am and the man made his own way back to his car in daylight none the worse for his night out. 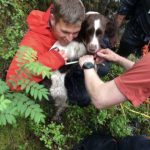