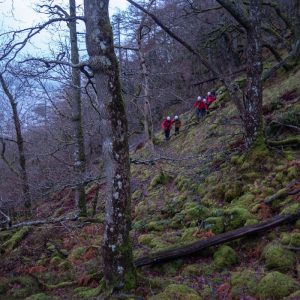 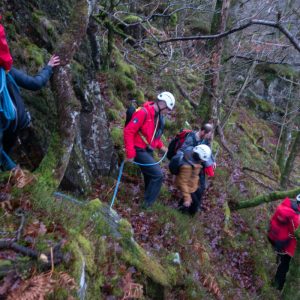 Three generations of the same family became stuck on steep ground whilst trying to return to their car at the end of a walk. A 60 year old, her 27 year old daughter and the 8 year old grandson had walked from Surprise View above Ashness Bridge down to the lakeshore. On their return they lost the path in the woods but could see on their mobile phone map that the car was almost straight above them. They attempted to climb up direct but found the ground increasingly steep and impossible to continue. The descent was now an unattractive proposition so they called 999 and asked for Mountain Rescue help. Some of the team members from the first callout went straight back out again and climbed up from near to Lodore Falls to locate the family under the crags below Surprise View. One team member took the young lad straight down whilst the rest of the team helped the two ladies securing them on a short rope on the steep, bouldery and slippery ground. Unlike the previous callout there was no poetry this time but lots of light-hearted banter. We all made it down just before dark. 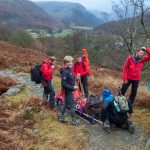 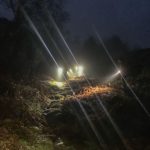