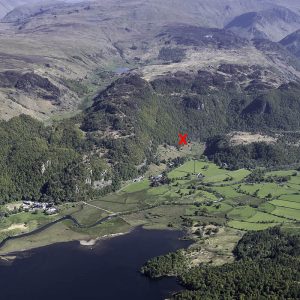 An adventurous 87 year old walker called 999 to say he was lost and on steep and tricky ground somewhere below Grange Fell in Borrowdale. The man was uninjured but had somehow lost the path and was descending cross country on very steep scree amongst dense trees. He was lucky enough to have mobile signal and plenty of battery on his phone so that contact could be maintained to try to ascertain his exact position. A small team was sent out to try to locate the man based on his clues: he could see glimpses of flat fields through the trees and the gable ends of some white houses looking west according to his compass. The description unfortunately fits most of the west-facing side of the Borrowdale valley from Lodore to Stonethwaite. We placed team members at intervals along this range and the man was instructed to blow his whistle in the hope one of the team would hear something. Nothing heard. The man continued his adventure downwards adding occasional additional clues until eventually we narrowed it down to Troutdale, the valley behind the Borrowdale Hotel. The team Landrover drove to the end of the track and as soon as we set off up valley a figure was spotted emerging from the trees at the side of the valley. The man was driven back to his car in Rosthwaite, extremely grateful, somewhat tired but none the worse for his wild adventure. 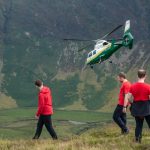