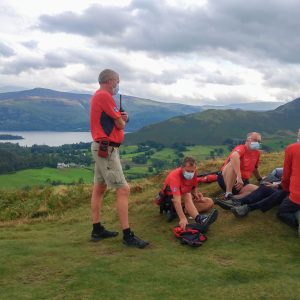 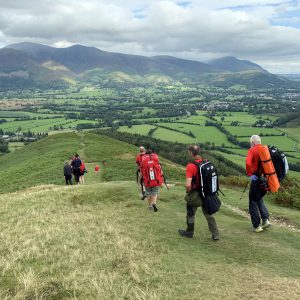 A 70 year old male was walking with family members up Barrow from Braithwaite when he started to feel unwell. With a known medical condition the family thought it wise to call for Mountain Rescue help. A hasty party of 5 set off from base in a Landrover followed shortly thereafter by further team members in a Sprinter. One team member, a retired orthopaedic surgeon, went direct to the scene and reached the casualty first to start an assessment. In light of the potentially serious nature of the incident the police had requested Coast Guard helicopter support. On the team’s arrival the casualty had recovered dramatically and after assessment by team medics the helicopter was stood down. After a check over the casualty was happy to walk down unassisted. The team escorted him and his family to the base of the hill to await the arrival of an ambulance for further checks.