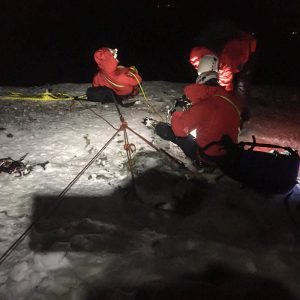 Passers-by contacted the Police reporting two people shouting for help having become stuck on Tarn Crag (above Scales Tarn), near the summit of Blencathra. One of the party later called advising they were uninjured but without suitable equipment, so were unable to move on steep and snowy ground. A well equipped fell runner in area went to the scene to assist and remained with them until the team arrived. As a number of team members were in Scotland undertaking winter training, RAF Leeming, who were in the area, were asked to support Keswick MRT. Four from the RAF team made the ascent whilst the remainder were kept on standby at Mousethwaite Comb. The two walkers were rope assisted from the difficulties and were walked off the fell. The Keswick team members returning from the Cairngorms spotted MRT lights above Mousethwaite Comb and asked if further assistance was required, but fortunately, after a full day on the hill and a 4.5 hour drive, this offer was turned down.

Many thanks to RAF Leeming, and the fell runner.