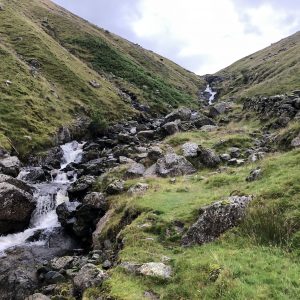 A lone male walker climbed Helvellyn from Swirls then descended Striding Edge to Red Tarn before returning to the top of Helvellyn via Swirral Edge. Unfortunately on top it was in cloud and he took off in the wrong direction following the footpath south. After some time walking in the rain and mist he realised he was lost and called 999. Initially the call went to the Patterdale team who passed it to Keswick. A phone find put his position close to Dollywagon Pike so he was instructed to continue on and down to Grisedale Tarn then turn right. A small team was sent out to approach from Dunmail Raise. They met the man as he was descending Raise Beck. He was given food and drink then escorted down to the team vehicle and given a lift back to his car at Swirls car park.