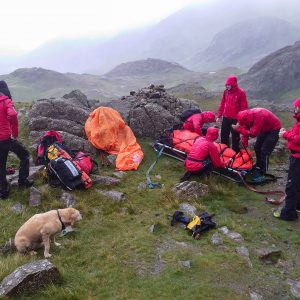 A 47 year old woman was descending Scafell Pike to Seathwaite with her husband. On reaching a point near  Lingmell Col she slipped and twisted her knee causing some soft tissue damage. Unable to weight bear and walk any further they called for assistance. Normally incidents in this area would be dealt with by the Wasdale team but as they were committed to another job they requested help from Keswick. Two vehicles were initially sent to Seathwaite in Borrowdale, and as this could be a potentially very long stretcher carry a third vehicle was also dispatched. By this time the forecast drizzle had arrived with strong winds on the summits. As the team made the long march up the Corridor Route requests were made for Coastguard helicopter support. However due to the conditions this was not possible. The casualty was eventually located and treated and stretcher options evaluated. The Duddon and Furness team were at Wasdale Head in support of the Wasdale team. They agreed to make the ascent up Lingmell and meet the Keswick team who would start the descent. After jointly negotiating some steep scree with a back rope the handover was made and the Duddon team continued the descent down Lingmell nose into Wasdale, while the Keswick team retuned back down the Corridor Route in darkness to Seathwaite.