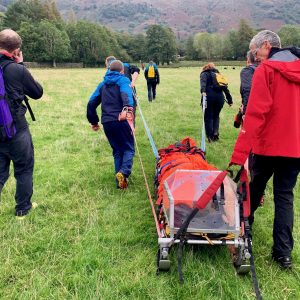 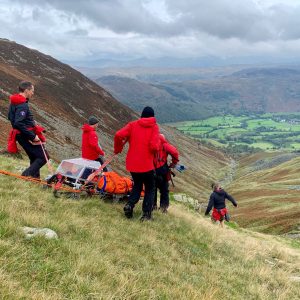 The Team was called out by the police to a lady who had injured her ankle at the top of the path that descends through the old Rigghead Quarries towards Rosthwaite. The lady had been out walking with a group and had fallen and was unable to walk. The casualty was located and after an assessment she was given some pain relief and her ankle splinted. Due to the location and the likelihood of a long stretcher carry Cockermouth MRT were asked to assist and seven of their team supported the effort. The casualty was carried down some steep terrain and once down at Rosthwaite was taken to the Keswick Cottage Hospital for further checks.

Many thanks to Cockermouth MRT for the support.