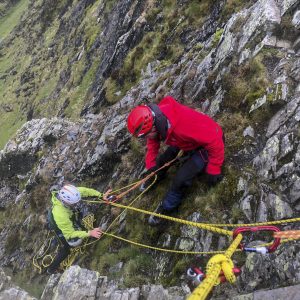 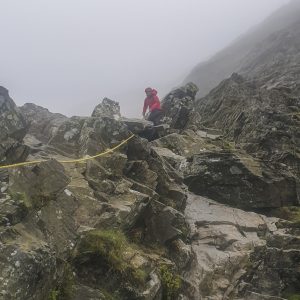 Having summited Blencathra in poor conditions, an experienced walker lost his path in the cloud. He descended towards Sharp Edge, but didn’t like the look of it in the conditions opting instead for what he hoped would be a safer option – a grassy gully. After a few steps he slipped and slid a short distance. He was now on his back on scree in a gully that feeds into “The Usual Gully” – the scene of many incidents. Thankfully, he didn’t try to extricate himself from this position so he called for Mountain Rescue assistance. The man was able to give us an accurate grid reference using the free phone App OSLocate. Laying in the gully, he soon started to cool down but had packed a foil bivi bag.
On arrival the team set up a rope system on Sharp Edge and lowered a team member down the gully. After putting on a helmet and harness the two were lowered to safer ground below where they were met by members of Penrith MR Team who had been asked to assist.
Penrith MRT then walked the casualty down to Mousthwaite Comb from where one of the Penrith Team kindly offered him a lift to his car at Mungrisdale.
Many thanks to Penrith MRT for their assistance in the absence of much of the Keswick team who are training on the Isle Of Skye.