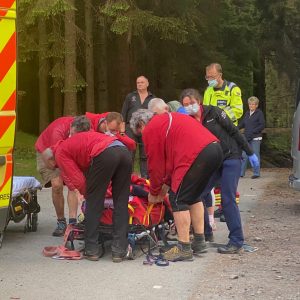 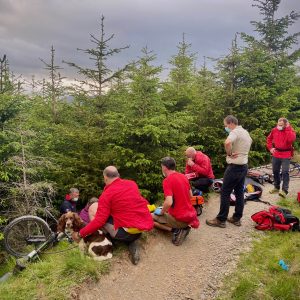 A 54 year old female came off her mountain bike on the south side red loop in Whinlatter and landed heavily on her head and back. A team set off quickly from base and was joined by a number of team members who travelled directly. Because of the potential severity of the injuries a helicopter from North West Air Ambulance (NWAA) attended as well as a North West Ambulance Service (NWAS) ambulance. The casualty was assessed and given pain relief by a team doctor before being packaged on a stretcher and taken down to the nearest forest track. A Sprinter vehicle from Keswick base transported the casualty from the forest track down to the ambulance for onward transport to Carlisle Hospital. Many thanks to Helimed 08 from Blackpool for attending.