After yesterday’s heavy snowfall a number of skiers were out searching for good lines of descent. One such skier ended up on steep and icy ground in Brown Cove and became cragfast. After requesting Team assistance the skier was fortunate that a Mountain Leader was in the area and helped the man to safer terrain.  The skier continued down (on skies), and the Team who were on their way up to Brown Cove returned to Swirls car park and back to Base. 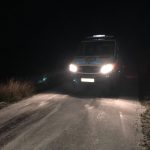