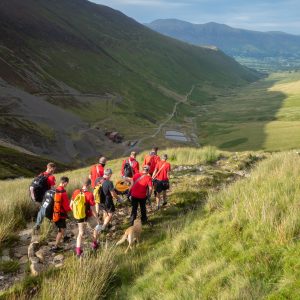 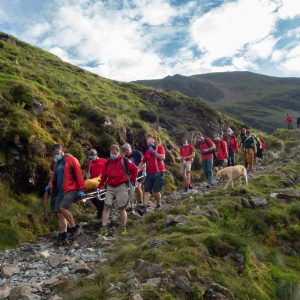 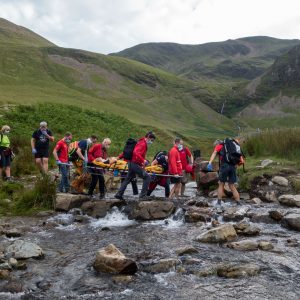 A 61 year old woman who was walking part of the Coledale Horseshoe above Braithwaite with her husband went over on her ankle whilst descending the rocky path down towards Force Crag mine. In pain and unable to weight bear they called 999 and asked for Mountain Rescue assistance. Thursday evenings are team training nights and many team members were preparing or just about to eat their evening meals before going to the base for practice. Instead two vehicles left base and drove up the valley on the mine track to Force Crag. Team members continued on foot up what is known as the ‘Burma Road,’ named during the Second World War when it was used to transport barites from the upper mines. Being a nurse the casualty knew the benefits of the medical acronym RICE (rest, ice, compression and elevation) and was lying comfortably with her leg raised and supported. Pain relief was given and the ankle splinted before loading the woman onto a stretcher for the carry down to the vehicles at the mine. The woman was driven down to an awaiting ambulance but in the end the lady’s husband opted to drive her to Carlisle Infirmary. 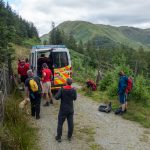 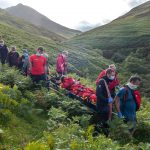