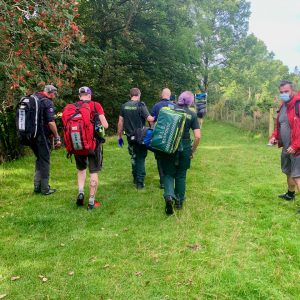 The team were requested by the ambulance service to help with a man who was having a seizure and was reported to be unconscious. Due to the serious nature the Great North Air Ambulance Service also attended.  The casualty was located on a path next to a stream near to Caldbeck and by the time the team arrived from Keswick the ambulance crew were treating the man. The man had fortunately recovered sufficiently to be able to walk himself to the ambulance which took him to hospital.