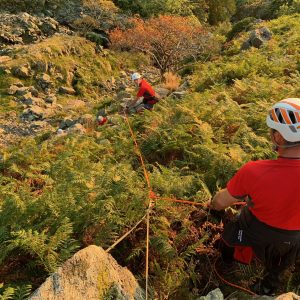 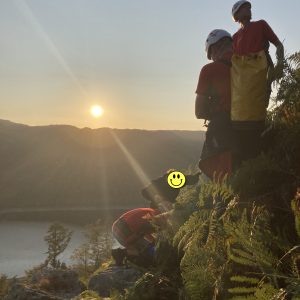 A couple had traversed Helvellyn from Wythburn Church over the summit and down to Swirls. They took two separate routes to return through the woods back to Wythburn. When the upper path became very indistinct and impassable due to fallen trees and general overgrowth the female ended up hopping over the fence and attempting to traverse the bracken slopes above the trees. After battling some considerable distance through chest-high bracken the woman reached the edge of a steep gully and decided it was time to call for help. A small team approached from the Wythburn end of the track and made their way up to the woman. A harness was fitted and using a rope secured from above it was possible to safeguard the female down, across the gully and down to the forest track and her awaiting husband.