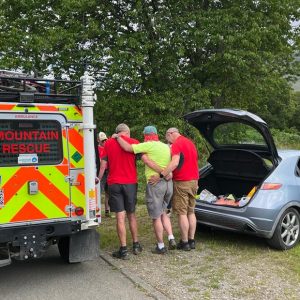 With incident 62 still on-going, the team were alerted to a biker on the Brundholme Road, Latrigg who had fallen from his bike suffering injuries to his shoulder and knee and unable to bear weight. The team was quickly deployed to the site, with two other team members going direct to assist immediately. The man was assessed by the team doctor as having minor injuries but requiring an x-ray on his knee. He was helped into the team vehicle and taken to his relative’s car for further transport to the local hospital.