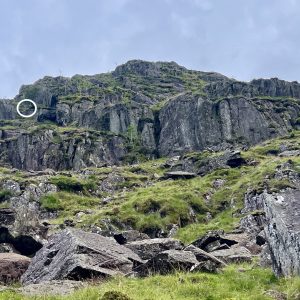 An 18 year old was on a walk up Scafell Pike with his family but he later wandered off on his own. The family who were unaware of his whereabouts eventually returned to Keswick via Seathwaite. The boy, also with no knowledge of his location, and in an area with intermittent mobile signal, managed to call the Police requesting help after getting into difficulty. Fortunately the Police were able to get a fix on his location and a small Keswick team were dispatched. Further attempts to call the boy and his family failed so a search was made of paths leading from Seathwaite Farm before heading off up Seathwaite Fell. Eventually the boy was spotted crag-fast on a ledge on Aaron Crags on Seathwaite Fell. Due to his precarious position he did the right thing in calling for help and thankfully he was uninjured. He was subsequently guided to over the top of the fell and down a safer route. Contact was later made with the family, and the boy and family, re-united back at Seathwaite.