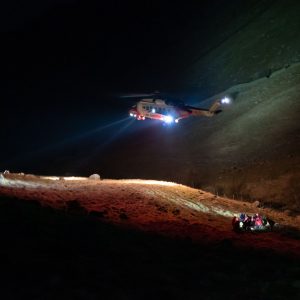 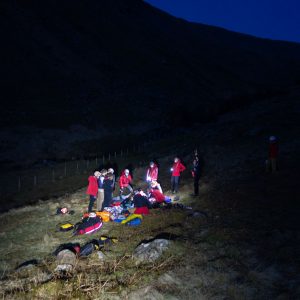 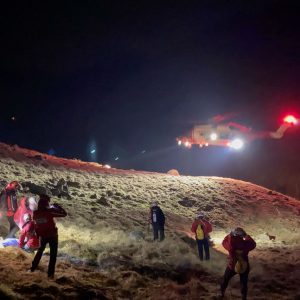 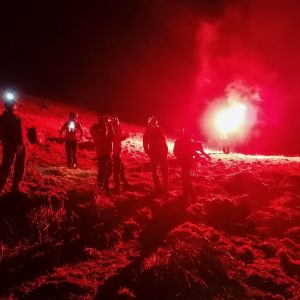 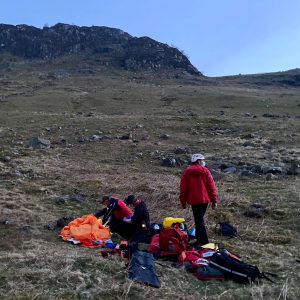 After a day in the fells a man was descending from Eagle Crag when he slipped and fell on steep ground. The man suffered multiple injuries including a broken upper arm, lower leg and broken ribs. Being a long way from the beaten path his whistles went unheard so, as he said, in the spirit of the late Doug Scott and his epic descent of the Ogre he spent the next 3-4 hours crawling very painfully down the slope. Eventually he reached the lower slopes of Greenup Ghyll and was spotted by walkers from the path on the other side of the stream. Two of their party ran down the valley to Stonethwaite and alerted the rescue services whilst another stayed with the casualty bandaging his broken leg and offering reassurance. An air ambulance had been requested but when the situation became clearer; the location and the extent of the man’s possible injuries this was stood down and the Cast Guard requested for a likely winch evacuation. The man was assessed by a team doctor and given strong analgesia before he was put onto a stretcher to await the Coast Guard helicopter. Fortunately there was a large enough low angle area close by that the helicopter was able to land light (still under power so as not to sink into the soft ground) to enable the man to be loaded for onward transport to hospital.