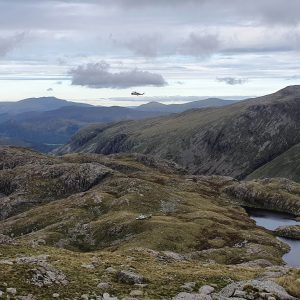 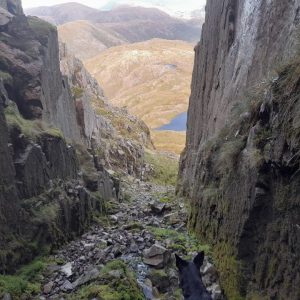 A man walking in the central fells started to ascend a steep gully on Great End. He soon realised that the path was too steep for him to continue and he became “crag fast”; unable to continue up or descend back down. He called 999 for Mountain Rescue help and the Keswick team was alerted. The team were light on numbers and due to a long carry-in with rope equipment, the Cockermouth team were asked to assist with the rescue. Three Keswick team members made their way up from Seathwaite to the base of the gully, while the Cockermouth team were flown by Coastguard helicopter to the top of Great End. With the casualty located in Custs Gully the two teams were able to reach the casualty and carefully walk him down using rope protection. The uninjured man was walked to Styhead Tarn by the Keswick team. He was then able to continue his descent to Wasdale where he was staying.

Many thanks to the Cockermouth team for their help