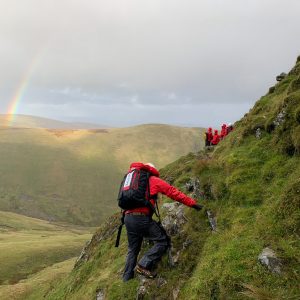 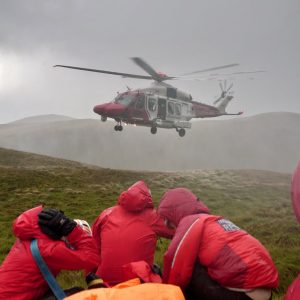 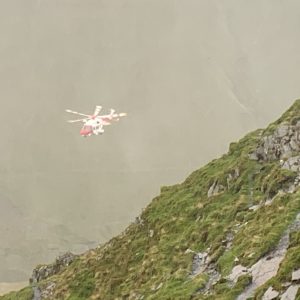 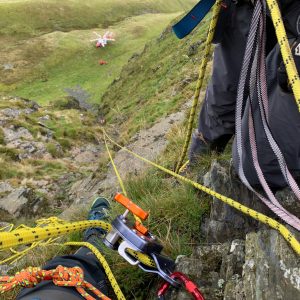 Whilst traversing Sharp Edge on Blencathra a man slipped from the ridge and fell down the ‘usual’ gully on the north side suffering fatal injuries. The casualty’s friend was able to make his way to the casualty from the bottom of the gully then called 999 to ask for Mountain Rescue. GNAAS Helimed 58 was first on the scene landing some distance away on Bannerdale Crags. The air ambulance doctor and paramedic then climbed the gully to the casualty. Keswick MRT meantime had sent team members to the base of the gully and also along the ridge in order to set up a lowering line. The Coast Guard helicopter R199 arrived on scene and attempted a pass over the gully to assess for winching but the gusty and showery conditions were not suitable. One team member was then lowered from the ridge down the gully to the casualty site to ‘pick off’ the paramedic, the casualty’s friend and finally the stretcher with the casualty. The Coast Guard were then able to transfer the friend and then the casualty to Crow Park in Keswick.

Our deepest thoughts and sympathy go out to the family and friends of the casualty.