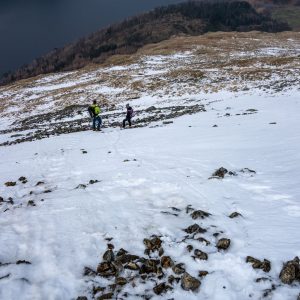 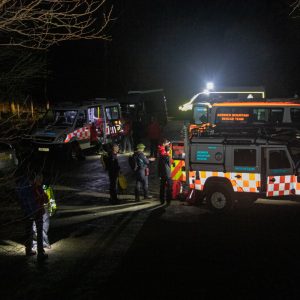 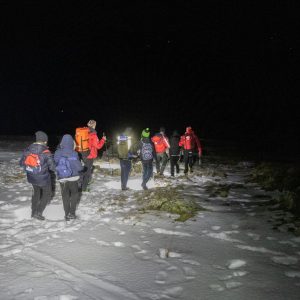 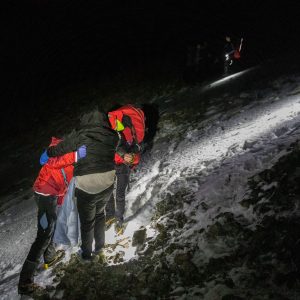 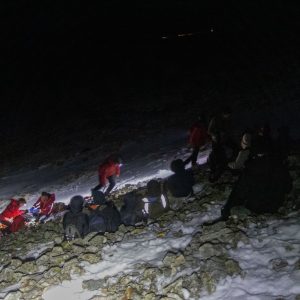 Having waited for a good weather forecast, a group of 13 school pupils, accompanied by two adults, climbed to the top of Helvellyn from Thirlmere. Their route to the summit involved a lot of movement over snow slopes and they then returned ‘off piste’ down steep snow patches and by scrambling over rocky scree. Unfortunately, the slope they chose is convex and consequently steepens as you descend. Without crampons, or ice axes to arrest any fall, the group made their way downhill as best they could on the hard snow until one of the group slid out of control coming to rest some 60-80ft lower down, but not before hitting his face and breaking his nose along with breaking a couple of fingers.

The group called 999 and asked for Mountain Rescue but could not give an exact location. The information given was that a member of the group had slid 50m and had sustained head injuries. Two vehicles left base and made their way to Swirls car park from where they started to climb towards Helvellyn knowing only that the missing party were somewhere between them and the summit. A Coast Guard helicopter was also called due to the potential seriousness of the incident. Control were later able to make further contact with the group and were then told that one of the party, on seeing the fall had run off down hill and had not been seen since. Further team members were subsequently tasked to find the missing person who was later found by police.

It was now dark as team members approached the steep section of Brown Cove Crags. Voices were heard off to the right of the path on the slopes known as Helvellyn Screes and after donning crampons to negotiate the steep and hard snow slopes the team members found the group huddled in small groups on scree ledges.

A reminder that despite that rare sun appearing in the sky, green fields and daffodils emerging down in the valleys the fells are in full winter condition and those venturing above the snow line should be suitably clothed, experienced and prepared.