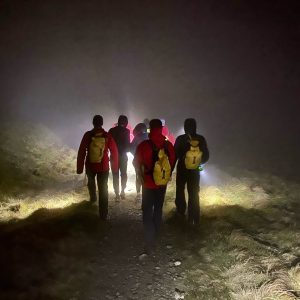 A young couple had summited Helvellyn from Swirls car park (Thirlmere) and intended to descend the same way. However they took a wrong turn in mist and as it became dark and without torches they eventually dialled 999 asking for rescue assistance. As Phonefind was able to locate them near to the summit of Raise it was only necessary to deploy a small team to walk the – by now – cold couple down to the road.