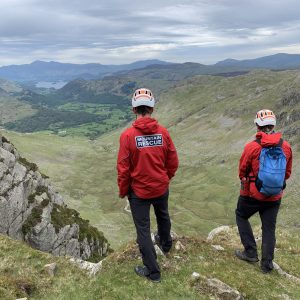 A father and daughter were climbing on Raven Crag above Comb Gill in Borrowdale when a climbing guide and his client, on an adjacent climb, witnessed the man fall some distance. The guide immediately called 999 and requested Mountain Rescue and abseiled down to the man to offer assistance.

In light of the circumstances a Coast Guard helicopter as well as the Great North Air Ambulance were requested to attend.

Keswick team members along with members of RAF Leeming MRT, who happened to be in the area, responded quickly. The rescue teams approached from below and were able to reach the man in Raven Crag Gully. Despite the best efforts of everyone, tragically the man died from the injuries sustained from his fall.

The daughter who was located at the bottom of the crag and examined by the team and the crew of the air ambulance was flown to Carlisle Hospital by the Coastguard for a thorough check. She was released the following day.

Keswick and RAF Leeming teams then carried the father on the stretcher to the valley floor.

Many thanks to the Coastguard crew in Rescue 199 from Prestwick, to the crew of the Great North Air Ambulance and to the members of RAF Leeming MRT for all of their assistance.

Our thoughts are with the family and friends.