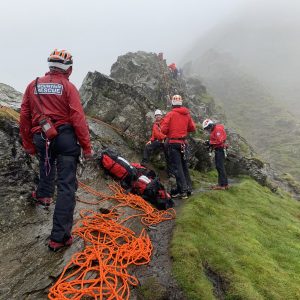 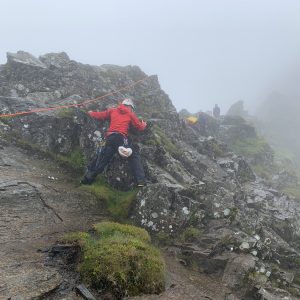 A walker who had previously climbed Sharp Edge on a couple of occasions in dry conditions underestimated its seriousness in the wet and became crag fast on the slippery slabs. A small team was despatched from base to help him down. Another couple who were also attempting to climb Sharp Edge reached the crux steep section and decided it was too dangerous and reversed the ridge. On their return they met the stuck man. The man of the couple was able to continue down the ridge to meet the team and indicate the location of the now stuck two people. A safety line was rigged up and after helmets and harnesses were fitted the two were safely brought down to the main path for a walk off.