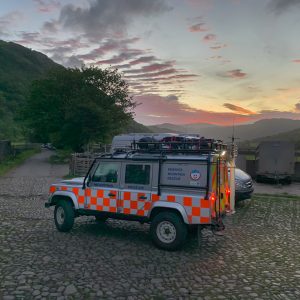 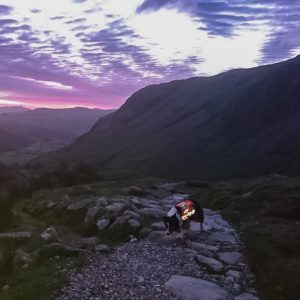 In the early hours of the morning two men were heading along the Corridor Route (Sty Head Pass to Scafell Pike) to set up a safety rope on Broad Stand above Mickledore, Scafell, for a Bob Graham Round runner. One of the men tripped and fell on a tricky step sustaining head injuries. After some time and a check over from his mate, they deemed the injuries serious enough to warrant calling 999 and asking for Mountain Rescue help. The two started to make their way down towards Seathwaite. On receiving the callout a team member who lives in the valley quickly made his way up towards Sty Head Tarn somehow missing the two men. The next team member to arrive at Seathwaite found the casualty and his mate who had made it down to the valley. The rest of the team arrived and after a quick assessment transported the injured man back to Keswick for a rendezvous with the ambulance. Thanks to the Great North Air Ambulance rapid response team who arrived at the base and did an assessment of the casualty.