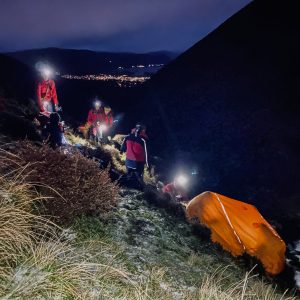 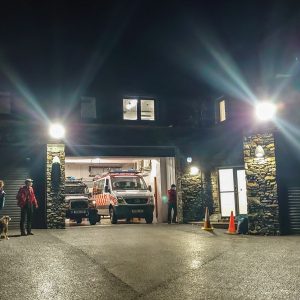 A party of 3 had walked from Keswick over Jenkin Hill then Little Man on Skiddaw with the intention of going to the top of Skiddaw. As they gained height the wind increased and the ground got increasingly snowy which alongside the often driving rain, sleet and snow made for some very cold conditions. After going over Little Man the party decided to bid a hasty retreat down the slopes towards Slades Beck to pick up the path coming down from Carlside to Millbeck. The female by this stage was really struggling with the cold and her legs were buckling under her. By the time they got down to Slades Beck her legs were so cold she could no longer continue so they called for mountain rescue help.

Members of Keswick team met up with RAF Mountain Rescue team members who were training in the area and made their way up to the casualty. On arrival the team found the casualty on very steep ground above the beck, she was in a survival bag and being prevented from sliding down the slushy slope by one of their group. A group shelter was erected and the female slowly warmed and given warm dry clothes. A stretcher rescue would have been next to impossible in the steep-sided stream valley so fortunately for everyone the female was eventually able to stand and start to make progress down protected by a rope and supporting team members.

Many thanks to RAF Leeming MR for their help with this callout. 13 Keswick team members, 3 RAF team members – 2 hours 48 minutes

Ask yourself and all of your party 3 questions before you set off:

– Do we have the right GEAR?

– Do we know what the WEATHER will be like?

– Are we confident we have the KNOWLEDGE & SKILLS for the day?