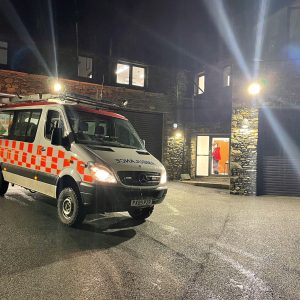 A couple had just started the descent in their car of Newlands Pass (Buttermere side) when they hit black ice and skidded towards the edge of the road overlooking a steep sided valley. After recovering from this shock they were unable to continue as a number of other vehicles had been abandoned, and one in particular had blocked the road completely. They were unable to reverse due to the ice and as they were not dressed for the cold temperature they eventually called the Police for a rescue. Keswick Team dispatched a Sprinter to help but a team member living nearby had already made his way to the summit of Newlands Pass and helped evacuate the couple. They were taken back to Keswick in the Sprinter with the intention getting help to rescue their car in the morning.