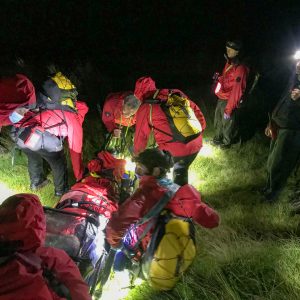 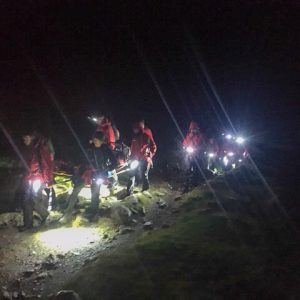 A 78 year old man climbed Great Gable from Seathwaite accompanied by his daughter. They were both well equipped and had been preparing for the walk for a while. However, as they descended he became exhausted and started stumbling on the wet rocky path falling a few times and taking a few minor knocks and scrapes. It became clear that he would be unable to complete the walk, so his daughter walked to find phone reception and called for help. A father and son who had been climbing Scafell Pike that day stopped to help the pair and waited with them for the team to arrive. One team member who lives in the Borrowdale valley reached the casualty quickly, locating him by Styhead beck.  Two vehicles of team members were also deployed from Keswick base and on arrival, the casualty was assessed and warmed and carried down on the stretcher. Due to the difficult nature of the descent, a further page went out to the team at 2100 to help with the carry. 6 more team members attended and helped with the final part of the carry down to Seathwaite, where his family were waiting to drive him back to his B&B for a well earned rest.