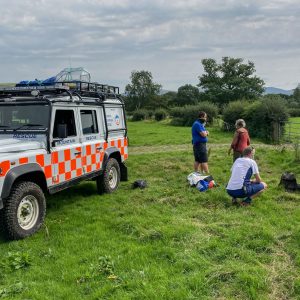 Two local walkers in their 80’s were on a path through fields near Braithwaite when they were charged by a bullock. Both were knocked to the ground but managed to make their retreat into an adjacent field where they called for assistance. With many team members already committed on the Great End callout a Landrover with four team members was quickly mobilised with three additional members going direct to scene. Both casualties were checked over by team medics and the male casualty was taken from the scene for onward transport by his wife to Carlisle hospital suffering from a hip injury.