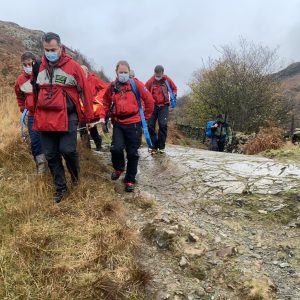 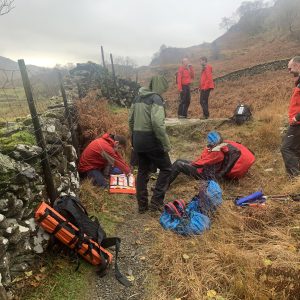 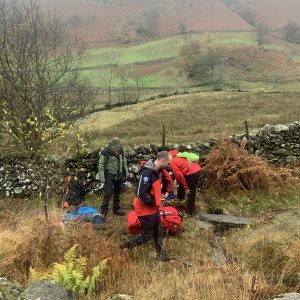 A 58 year old female lost her balance after being bumped into by a playful group of dogs on the stream-side path below Watendlath. The resultant slip on wet rock led to a hip injury severe enough to prevent her continuing. The husband had to walk to Watendlath to get a mobile signal from where he was able to call for Mountain Rescue help. Two vehicles left base and made their way towards Watendlath. As the exact casualty location was not known teams approached from below and above quickly locating the casualty approximately 500m below Watendlath. Analgesia was given to relieve pain before stretchering the female across the river to a team vehicle. The casualty was then taken to Keswick Cottage hospital to rendezvous with an ambulance that would take her to Carlisle Infirmary for an x-ray.