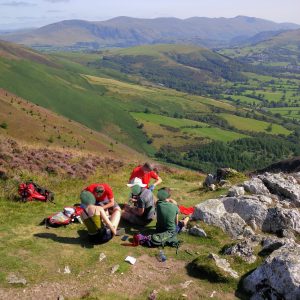 A woman called the police and asked for Mountain Rescue when her husband had a fall at Whitestones on Carlside. The man had gashed his hand and dislocated a finger and was close to fainting when he tried to stand up. A small team was sent to help but by the time they reached him the man had reduced his own dislocated finger. A team paramedic assessed the mans injuries then dressed the gash on his hand before the party were walked back down.