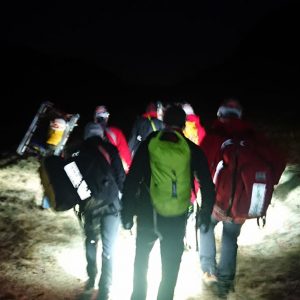 A man slipped on his descent from Dale Head and dislocated his shoulder. One of his two companions ran down to get a phone signal to call 999 and alert Mountain Rescue whilst his other friend helped him descend slowly. With a mobile casualty and no signal meaning no further communication from them, the team approached from both Rosthwaite in Borrowdale and Littletown in Newlands with a couple of team members also approaching from Honister to hopefully locate moving target. He was eventually found on the descent to Newlands. Pain relief was given, the shoulder re-located before being stretchered down towards Littletown. An ambulance had been called but the man opted to travel to hospital with his friends.