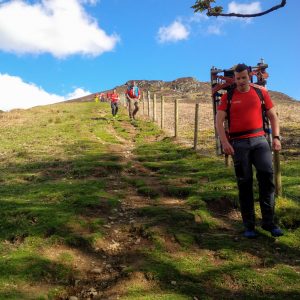 A man was walking with his wife on High Seat when he jumped over some boggy ground. On landing he heard/felt his hamstring snap. The couple called 999 and asked for mountain rescue assistance. Fortunately the Great North Air Ambulance was available to attend quickly. A Sprinter with Keswick team members was deployed with the knowledge that GNAAS were en route just in case the helicopter had to be diverted. Sprinter parked at Ashness Bridge and the hill party began ascending High Seat. GNAAS were able to land close to the casualty and the Keswick MRT hill party were able to return to base before reaching the casualty. The casualty was flown to Crow Park in Keswick for onward transport to hospital.