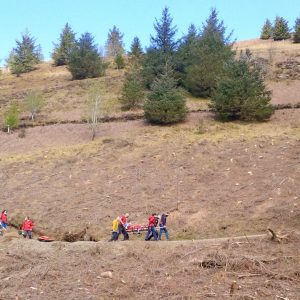 A couple of mountain bikers were descending the “Grand National” section of the North Red Loop when one of the riders crashed and stopped breathing as a result of a head injury. His colleague commenced CPR and after a short time the injured man started to come round. Ambulance paramedics, and emergency medics were soon on scene and continued treatment. Helimed 58 was also tasked and landed at Thornthwaite and a Keswick MRT vehicle transported the crew to the casualty site. Eventually the man was packaged and stretchered a short distance to an ambulance which took him to the helicopter and onward transfer to hospital. The casualty was wearing a helmet which undoubtedly saved him from a more serious outcome.