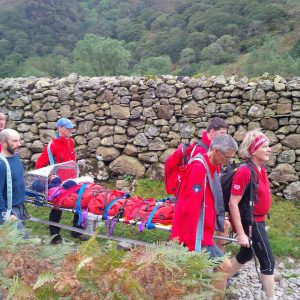 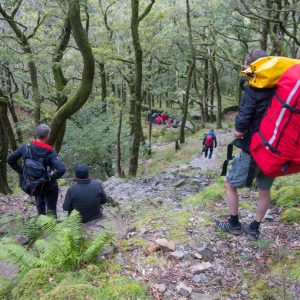 A man in his 70s was descending the path from Dock Tarn to Stonethwaite but slipped and injured his thigh and elbow. He tried to continue but eventually had to stop as he was unable to weight bear. A couple on the same path came across the man but as the mobile signal in this part of Borrowdale is a problem they continued to Stonethwaite where they were able to call for assistance. Land Rover ‘Echo’ was dispatched and the man was quickly located above the tree line and treated for cuts and provided some pain relief. Whilst waiting for the stretcher crew to arrive in a second vehicle, the casualty wanted to try descending the rocky path with support from two team members. This was fortunate because as the man was assisted a report came through that a female had fallen and injured her ankle about 200m down the same path, and very near to the approaching stretcher team. This could be a Keswick MRT record in getting to a casualty! Both injured parties were helped to an awaiting ambulance who checked them over and took them to hospital at Whitehaven.