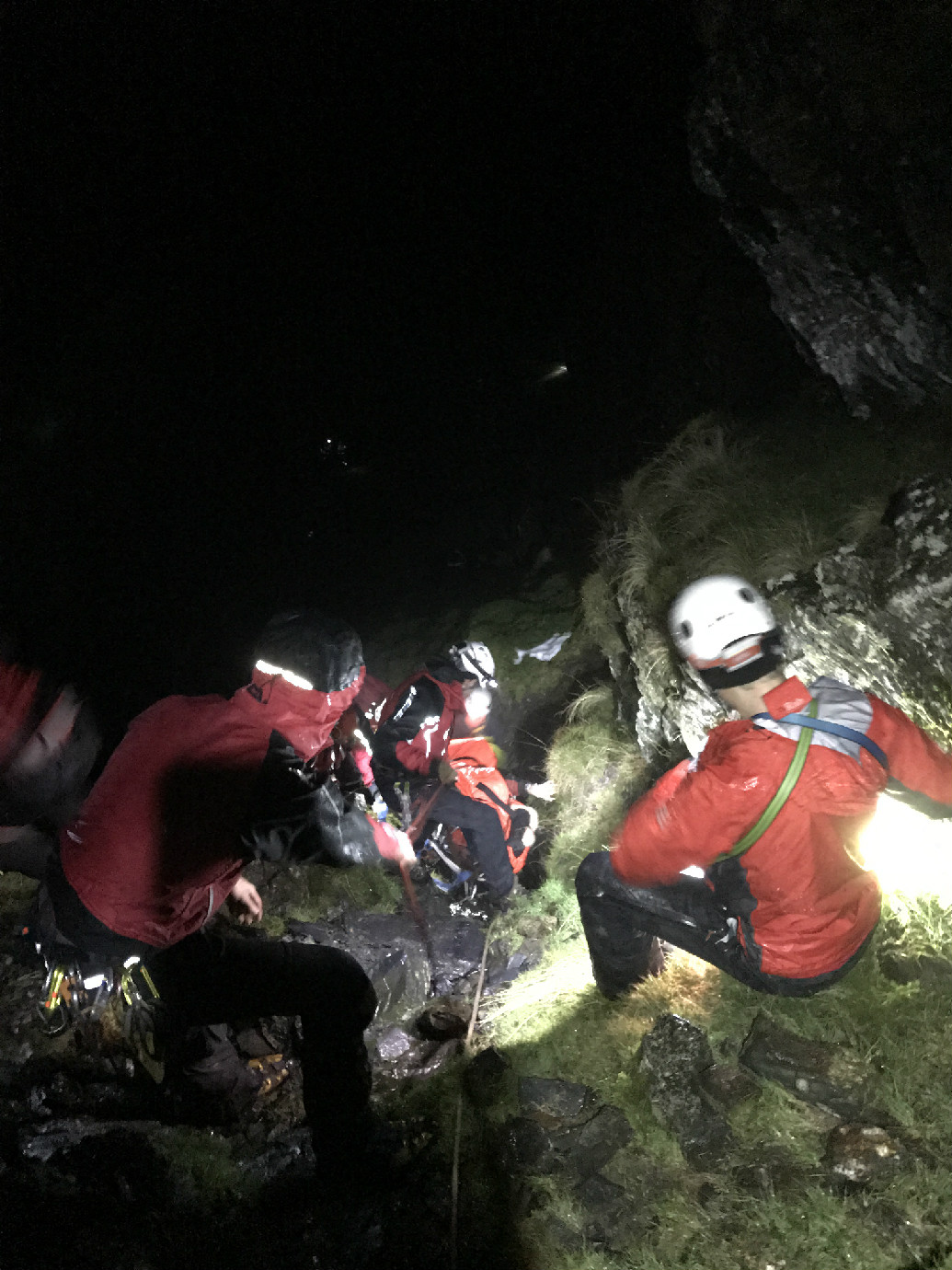 Incident No: 89
Date: 13th November 2016
Time: 13:24
Location: Sharp Edge, Blencathra
Incident Details:  One of the places the Team really doesn’t want to visit at this time of year is Sharp Edge, because of its wet slippery state after rain or snow. It is one of the Team’s “black spots”. So when the pagers summoned the Team this afternoon, it was with little surprise that we learned that a 44 year old male had fallen 50m down the usual gully on the north side. His two companions had managed to reach him with the assistance of a passerby, and found he was badly injured. The Team was assembled and mobile within 20 minutes, after requesting the services of a Coastguard helicopter. The Great North Air Ambulance, Helimed 58 had also mobilised to the scene. As the Team were initially low on numbers, assistance from Penrith MRT and a visiting RAF team was sought, and readily responded to.

The weather was a significant problem, with low cloud and drizzle. Despite this, the paramedic from the Great North Air Ambulance had managed to reach the casualty, who had head, neck and chest injuries. Team members rigged the route to ensure the safety of those in the gully, and the first task was to evacuate the casualty’s companions, and safeguard the medical personnel working on the casualty. The companions were walked down to safety by a pair of Team members. The Coastguard helicopter then lifted relays of rescuers up the hill, and stood by at the bottom until the casualty had been loaded on to the stretcher, and lowered the further 50m down to the scree at the foot of the gully. This took a long time because of the conditions and the need to monitor the patient. During the wait, the weather deteriorated still further, and it became obvious that it would be impossible for the S92 to evacuate the patient from the scene. The aircraft went to Carlisle for fuel, but once it returned, visibility was no better, and with regret, the aircraft was stood down.

The Teams were now faced with stretchering the casualty down to the road, where the casualty could be loaded on the air ambulance. Relays of rescuers, who by now were 47 strong, carried him down over treacherous terrain to eventually reach the foot of Mousthwaite Comb. Here he was loaded aboard Helimed 58, and flown to the Cumberland Infirmary. The rescue had taken 6 and a half hours, and at that point there was still all the clearing up to do.

We are indebted to the teams and aircrew who came to assist us today, who helped us deliver our patient into safe care. We would again reiterate our advice that Sharp Edge is a dangerous place after snow or rain, and needs the greatest of care.