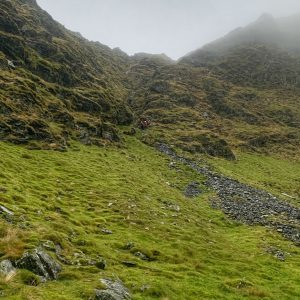 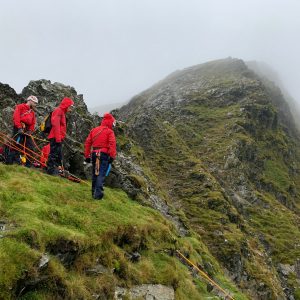 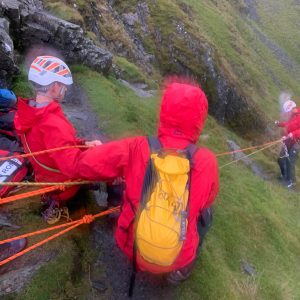 A 61 year old man was descending Sharp Edge after an ascent of Blencathra. Having done the steep part of the scramble down the man decided that he didn’t like the look of the slab section of Sharp Edge, the rock was extremely slippery in the wet and it was very exposed to the strong south westerly wind. He opted to follow what looked like a path down on the north side. Not long after starting his descent the man slipped then tumbled some 15m or so down the gully but very fortunately managed to stop himself having suffered only bruising and a few cuts. Deeming both the ascent and descent too dangerous to attempt in the conditions he wisely called for help.

Some of the team were just finishing off the incident (102) in Whinlatter so were immediately re-tasked to Blencathra. More team members left base to attend the Sharp Edge incident. Not knowing the full extent of the man’s injuries and anticipating a possibly difficult extraction assistance was requested from Penrith MRT and also the Coast Guard helicopter. The man was located and a rope rescue was set up from the ridge. One team member was lowered down to the man, a helmet and harness was then fitted before both were lowered down the gully to an awaiting team doctor who did an assessment of the man’s injuries. Someone suggested the man buy a lottery ticket as he had luckily got away with relatively minor bruises and cuts. Some pain relief was given and the man was able to walk down unaided. Many thanks to Rescue 936 from Caernarfon and the team members from Penrith MRT.