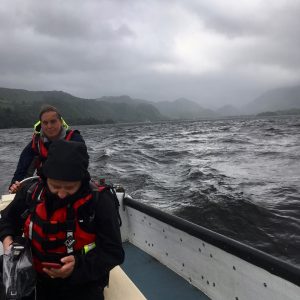 Firstly at 18.15 the Isle of Man police alerted us that a group of walkers were in difficulty near Hard Knott pass. This was quickly passed on to the Duddon and Furness MR team who cover this area. Next at 01.30, two 25 year olds camping on Catbells suffered a tent collapse in strong winds. As they were uninjured they were coached over the phone to pack up the tent and descend on the same route as they walked up. At 09.32 Derwentwater Marina received a call from eight uninjured persons stranded on St Herbert’s Island after their inflatable boats were blown away during the night. A Keswick MR team member who works at the marina asked for team support to assist.

Two boats were deployed to recover the stranded party and they were delivered to the lake shore close to their vehicles. Some time was then spent searching and recovering the missing boats. As things were drawing to a conclusion reports were received of two people stranded on Derwent Island. Their situation was checked but no assistance was required, and last but not least a pedalo abandoned on the shore, presumably due to the challenging conditions, was towed back to the marina.