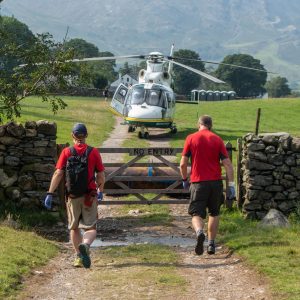 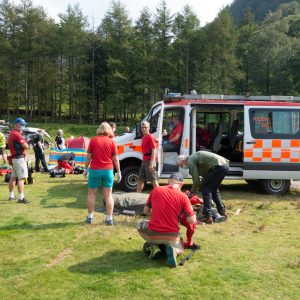 An 18 year old male was walking through Stonethwaite campsite after an amble up the valley when he appeared to suffer a seizure. His friends called the emergency services and an ambulance was dispatched and made it to Stonethwaite hamlet but could not navigate the rough track to the campsite. Whilst continuing on foot the ambulance crew requested assistance from Keswick MRT. A vehicle was dispatched to the campsite and met a number of other team members who had travelled direct. The man’s condition also triggered a response from the Great North Air Ambulance (GNAAS) who landed in a nearby field. After an assessment by the medical teams the Keswick MRT Sprinter transported the casualty to the land ambulance who then took the man to the Cumberland Infirmary at Carlisle.